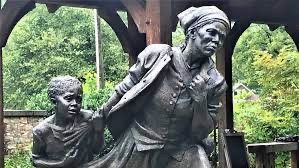 As of 2022 Juneteenth is a US federal holiday.
First celebrated by Black communities in Texas, it marks June 19th, 1865, when Union troops arrived at the port of Galveston, to enforce Lincoln’s Emancipation Proclamation. While Americans celebrate that enslaved people were freed, many refuse to hear the cruel facts of slavery or allow them to be taught. The late Marian E. Barnes was a storyteller, author, historian, child advocate, and Black community leader in Austin, Texas. This week and next you hear her read her story based on historical records – a story nobody would publish because it depicts some of the cruel and violent practices and ways of speaking that slaveholders used to control and abuse their captives, throughout what Barnes terms 300 years of holocaust. Part two includes a warning to listeners. No FCC rules are violated.

Host(s): Frieda Werden
Featured Speakers/Guests: Popular storyteller, historian, community leader and child advocate Marian E. Barnes produced several books, including Black Texans: They Overcame; a series of three books of African-American tales under titles beginning Talk That Talk; and Twelve Steps to Bringing Out the Best in Every Child. She died in 2012, at age 89.

Credits: Story recorded by Marian E. Barnes 1996, and copyrighted by her. Used by permission of the author. Recording by Frieda Werden in the studio at WATER (Women’s Access To Electronic Resources), a project of Genevieve Vaughan’s Foundation for a Compassionate Society.

Comments: There has been tremendous whitewashing of this era of history by people who don’t want to know the truth or allow it to be taught – not only when the story was recorded, but to this very day. As Barnes says repeatedly, it is important to remember.