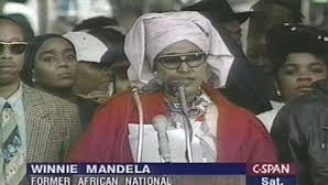 On October 25, 1997, Winnie Madikizela-Mandela addressed the first Million Woman March, held in Philadelphia. After an introduction summarizing the history of her work in South Africa, Mandela praised the work, struggle and successes of Black women in the United States, and held them up as a model for the world.

Credits: Recording of this event for WINGS was by Daa’iya El-Sanusi (Lomax), of WBAI. Thanks for further information to the Million Woman March, which has evolved into a global movement of Africana women in the Diaspora. WINGS series producer, Frieda Werden

Comments: From the WINGS archives – updated to 2020