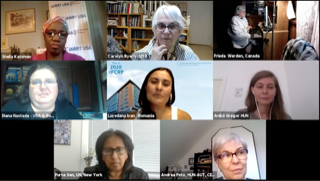 In many parts of the world, governments and other actors are attempting to limit or banish Gender Studies and the concepts it explores. On Thursday, July 30, 2020 the US chapter of the International Association of Women in Radio and Television hosted a web-based discussion on this issue, titled Global Attacks on Gender Studies and the Dismantling of Critical Knowledge. Experts from Romania, Hungary, UN women and the USA spoke about reasons and methods behind both the pushback and the pushback against the pushback.

Credits: Event produced and hosted by Sheila Dallas Katzman, President of the US chapter of the International Association of Women in Radio and Television, with Diana Nastasia and Howard Katzman. Program producer, Sofia Vavaroutsos. Series producer for WINGS, Frieda Werden.