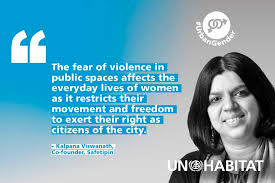 In 2005, the Jagori Women’s Resource Centre in Delhi began to develop a multi-stakeholder research and organizing project for women to evaluate their cities for safety, map the results, and use the data to call publicly for change. As of 2020, the project, now based in Haryana, India, and known as Safetipin, has spread to Latin America, Africa, and much of the Asia-Pacific region.  Their reports can be found at safetipin.com Kalpana Viswanath, described the project in her 2015 address to the International Association of Women in Radio and Television.

Host(s): Frieda Werden
Featured Speakers/Guests: Kalpana Viswanath directed Gender Inclusive Cities, a project of the Montreal-based nonprofit Women in Cities International, was a director of Jagori and is co-founder and current director of Safetipin. She has a PhD in Sociology.