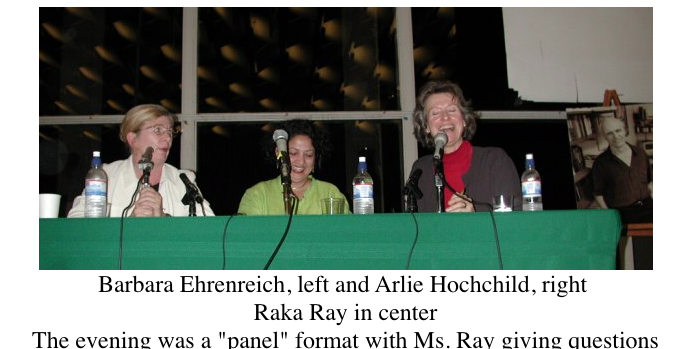 Just before Labour Day 2022, renowned US journalist and writer Barbara Ehrenreich died. In 2000, she was about to release the book Nickle and Dimed, about going underground as a domestic worker. She and sociologist Arlie Hochschild were writing about international capitalism’s effects on women – gutting their livelihoods and bringing them to developed countries for work, leaving their kids behind. WINGS contributor Kellia Ramares chose excerpts from their joint appearance at the 4th annual Mario Savio Free Speech Lecture in Berkeley, California. Their speech was titled FORWARD AND BACKWARD: Women, Globalization and the New Class Structure

Host(s): Kellia Ramares, Frieda Werden
Featured Speakers/Guests: Barbara Ehrenreich was an American author and political activist. During the 1980s and early 1990s she was a prominent figure in the Democratic Socialists of America. She was a widely read and award-winning columnist and essayist and the author of 21 books. Arlie Russell Hochschild is an American professor emerita of sociology at the University of California, Berkeley and writer. Hochschild has long focused on the human emotions that underlie moral beliefs, practices, and social life generally.

Comments: The insights in this talk are as relevant today as 22 years ago – only more so.