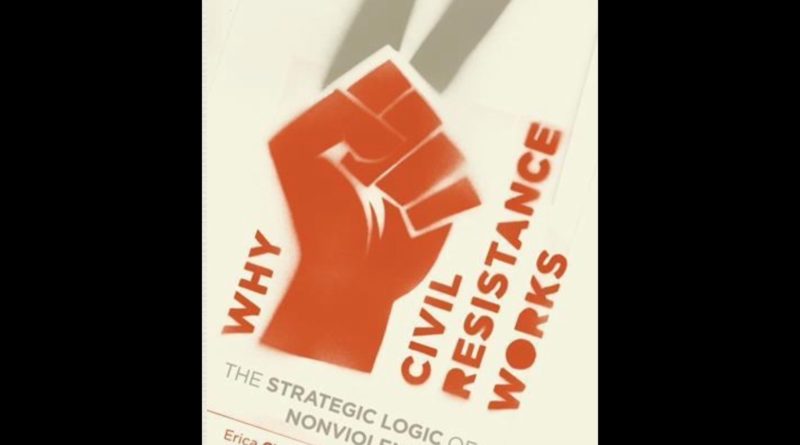 Erica Chenoweth directs the Nonviolent Action Lab at Harvard’s Carr Center for Human Rights Policy. Chenoweth and Maria Stephan researched and published an empirical study titled Why Civil Resistance Works: The Strategic Logic of Nonviolent Conflict. Carol Boss of Peace Talks Radio interviewed Chenoweth about their work and learned why nonviolent campaigns are most often more effective than violent revolt. Examples include The Philippines, Serbia and the United States.

Host(s): Carol Boss and Frieda Werden
Featured Speakers/Guests: Erica Chenoweth, Ph.D. is the Frank Stanton Professor of the First Amendment at Harvard Kennedy School and a Susan S. and Kenneth L. Wallach Professor at the Radcliffe Institute for Advanced Study. Chenoweth directs the Nonviolent Action Lab at Harvard’s Carr Center for Human Rights Policy, where they study political violence and its alternatives. Foreign Policy magazine ranked Chenoweth among the Top 100 Global Thinkers in 2013 for their efforts to promote the empirical study of nonviolent resistance. Chenoweth’s latest book Civil Resistance: What Everyone Needs to Know (2021, Oxford) explores in an accessible and conversational style what civil resistance is, how it works, why it sometimes fails, how violence and repression affect it, and the long-term impacts of such resistance. Chenoweth’s next book, with Zoe Marks, explores the impact of women’s participation on the outcomes of mass movements. In addition to exploring why women’s participation makes movements more likely to succeed, Marks and Chenoweth explore how frontline women’s participation leads to progress in women’s empowerment in some cases and reversals in others, as well as how gender-inclusive movements impact the quality of egalitarian democracy more generally. Chenoweth’s other books include On Revolutions (Oxford, forthcoming 2022) with Colin Beck, Mlada Bukovansky, George Lawson, Sharon Nepstad, and Daniel Ritter; The Role of External Support in Nonviolent Campaigns: Poisoned Chalice or Holy Grail? (ICNC, 2021) with Maria J. Stephan; Civil Action and the Dynamics of Violence (Oxford, 2019) with Deborah Avant, Marie E. Berry, Rachel A. Epstein, Cullen Hendrix, Oliver Kaplan, and Timothy Sisk; The Oxford Handbook of Terrorism (Oxford, 2019) with Richard English, Andreas Gofas, and Stathis N. Kalyvas; The Politics of Terror (Oxford, 2018) with Pauline Moore; Rethinking Violence: States and Non-State Actors in Conflict (MIT, 2010) with Adria Lawrence; Why Civil Resistance Works: The Strategic Logic of Nonviolent Conflict (Columbia University Press, 2011) with Maria J. Stephan; and Political Violence (Sage, 2013). Chenoweth has also published work in International Security, The Journal of Politics, Nature: Human Behaviour, Science Advances, American Sociological Review, Journal of Democracy, British Journal of Political Science, Annual Review of Political Science, The Journal of Peace Research, The Journal of Conflict Resolution, Mobilization: An International Quarterly, Journal of Human Rights, and Political Research Quarterly among others. In 2014, Chenoweth received the Karl Deutsch Award, which the International Studies Association gives annually to the scholar under the age of 40 who has made the greatest impact on the field of international politics or peace research. And together with Maria J. Stephan, they won the 2013 Grawemeyer Award for Ideas Improving World Order, which is presented annually in recognition of outstanding proposals for creating a more just and peaceful world order. Their book, Why Civil Resistance Works, also won the 2012 Woodrow Wilson Foundation Award, given annually by the American Political Science Association in recognition of the best book on government, politics, or international affairs published in the U.S. in the previous calendar year. Along with Jeremy Pressman of the University of Connecticut, Chenoweth is founding co-director of the Crowd Counting Consortium, a collaborative public interest project that collects data on the size of political crowds protesting within the United States since the first Women’s March of 2017. At Harvard, Chenoweth is Core Faculty the Carr Center for Human Rights Policy, Core Faculty and Board Member at the Belfer Center for Science and International Affairs, a Faculty Affiliate of the Ash Center on Democratic Governance and Innovation and the Women and Public Policy Program, and a Faculty Associate at the Weatherhead Center for International Affairs. Before coming to Harvard, Chenoweth taught at the Josef Korbel School of International Studies at the University of Denver. From 2008-2012, Chenoweth taught at Wesleyan University, where they received the Carol A. Baker Memorial Prize for excellence in junior faculty research and teaching. They have also held fellowships at Harvard, Stanford University, UC-Berkeley, and the University of Maryland, the Peace Research Institute of Oslo (PRIO), the One Earth Future Foundation, and the Simon-Skjodt Center for the Prevention of Genocide at the U.S. Holocaust Memorial Museum. Chenoweth has also served in advisory positions at the International Center on Nonviolent Conflict, the Peace Science Society International, and the International Studies Association. Chenoweth has presented their research all over the world at various activist workshops and trainings, academic and scientific conferences, government briefings and workshops, and intergovernmental organizational panels. Their research and commentary has been featured in The New York Times, The New Yorker, The Washington Post, Foreign Affairs, Foreign Policy, The Economist, The Boston Globe, TEDxBoulder, The New Republic, The Guardian, The Atlantic, and elsewhere. Along with Barbara F. Walter of UCSD, Joseph K. Young of American University, and Christian Davenport of the University of Michigan, Chenoweth hosts the blog Political Violence @ a Glance, which has won multiple OAIS Awards for Best Group Blog in 2018 and 2014 and Most Promising New Blog in 2013. In addition, Chenoweth has also won two individual OAIS blogging awards for Best Blog Post in 2018 and 2014. Chenoweth hosts a blog called Rational Insurgent and has been an occasional blogger at The Monkey Cage and Duck of Minerva. Chenoweth received an M.A. and a Ph.D. in political science from the University of Colorado and a B.A. in political science and German from the University of Dayton. When they are not teaching or writing, Chenoweth stays busy fly-fishing, maple sugaring, and experimenting with sustainable farming.

Credits: Carol Boss conducted this interview for Peace Talks Radio. It has been edited and updated for WINGS by Frieda Werden.